Well, I'm back in London, in my comfortably messy home surrounded by all my favourite books which I'd begun to miss after being away a mere ten days. My Amman trip was great. Meeting up with family and friends is not only about fun but it is most and foremost about soul-healing. Thanks to apps like 'What's app' and Skype and facetime and all the other gazillion gadgets out there, staying in touch has never been easier. But nothing beats the actual hug of a mother, the intimate late night chats with sisters and brothers, the mandatory sloppy kisses from aunts, the nudges of teasing cousins, the cuddles of nieces and nephews and the blessings of in-laws. I come from a large family although these days you'd never guess it as we're all scattered in very much every continent and getting us all together in one place is quite near impossible. But we do have a wedding coming up and I personally am going to make sure that I attend in August.

'Too much to do and too little time to do it in' is probably what best describes my trip this time round. Zooming around town from one family engagement to another stuffing my face with fabulous food, I did however manage to fit in a few visits to local haunts around town and one of my favourite visits was to 'Soap House' in Rainbow Street which smelled divine upon entering and stocked all sorts of lovely locally produced Jordanian soaps of course but also hand creams and lotions and massage oils as well. It is situated in what is considered the old part of the town which has witnessed a rejuvenation in the last ten years. It is a gorgeous area that once housed the late King Hussein's family and is only a stone's throw away from his school. Its buildings overlook Amman's famous Citadel and Jordan's Raghadan flagpole (which once held the status of the tallest free-standing flagpole in the World). Amazing history and an amazing tourist area well worth a more thorough investigation on my next visit. 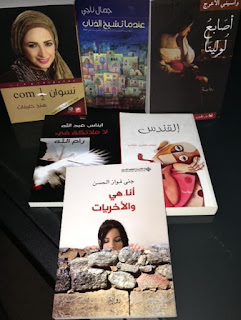 And then there were the books. I managed to secure a few of the books that have been shortlisted for the International Prize for Arabic Fiction (there's only that much one can carry aboard a plane these days) including a handful of books by Jordanian authors. The IPAF winner's ceremony will be taking place in Abu Dhabi on April 23rd. I might actually be in Abu Dhabi in time for that (but more on that in a later post). Anyway, my sister has promised to send me the rest of the books once she acquires them (she is the co-founder of an online book rental website, the first and only one of its kind in Jordan called Mintaad) and so by April I will have completed the list. Of course, these books are in the Arabic language but previous years have proven that prizes such as this one have not only elevated the profile of Arab authors but translations into different languages have been secured allowing for wider recognition and readership.

One of my favourite evenings (and there were many) were spent at my sister's house with many of my family members gathered over food (naturally) but also to listen to wonderful music. My niece, nephew and my 10-year-old played beautifully on the piano but the surprise of the evening was when my brother-in-law announced that he had recently been learning to play the Qanun (a type of string instrument essentially a  zither with a narrow trapezoidal keyboard). I have included a photo and a small video of his debut performance. For more on the Qanun, click HERE.

So, now as I sit typing this and going over the events of the last week, it all seems like a dream for how fast  it seems to have gone by. No matter how much time I spend away from Amman it is always a warm place to return to. It is a country rich with the generosity of its people, their warmth and their intellect. It is such a fantastic place to mingle with all sorts of people. I was lucky to be seated for dinner at the same table with this charming woman whose family were best friends with Egyptian Mohammed Abdel Wahab and who personally checked on her when she was hospitalised in Egypt during her stay there. In another incident I met and chatted to the immediate relatives of Selma Dabbagh (author of 'Out of It') and from asking around at the local bookstore about author Hisham Bustani, it turns out that he is the son of one of my dad's really good friend (Thanks to both of them I gave my first talk at Amman's Rotary Club at the tender age of 23!). Unfortunately I did not get a chance to meet Hisham but maybe on another visit.

And so as I bundle up with a hot water bottle against this arctic blast beating down on London at the moment, my heart feels warm and sentimental and on this note I leave you with my new found hero who thanks to his amazing voice I was able to at last make peace with my fear of flying. My hero is Alfie Boe and the song I choose today is 'In My Daughter's Eyes' and regardless the gender of your child/children I am sure this will strike just the right note. Enjoy!