Book Review: 'Out of It' by Selma Dabbagh 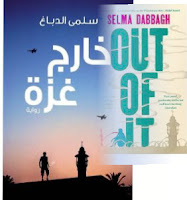 In 1993, following the Oslo Accord signed by Israel and the Palestinians, it was agreed that Israel Defence Forces (IDF) would withdraw from parts of the Gaza Strip and the West Bank captured in the 1967 war with the Arabs, and Gaza would be included in the territories of the Palestinian National Authority. In 2005, when Israel pulled out its final troops from the Gaza, it declared its occupation of that area as over. A fact disputed by the Palestinians because Israel still controls Gaza's land and water borders as well as its airspace.

Two military factions inside Gaza, Fatah and Hamas, fought to gain control inside of Gaza (sometimes with deadly gun fighting and assassinations). In 2007, the Islamist militant group Hamas won the elections and in response, Israel to this day continues not only to impose severe restrictions  from and into the city of Gaza but has carried out various military operations against Hamas claiming that it is protecting its borders and its inhabitants from  Hamas' militant rocket shelling. Many civilian lives have been lost and casualties sustained on both sides in the process.

It is during one such military Israeli bombing operation of Gaza (exact timeline not specified) that the novel 'Out of It' opens. Rashid, a twenty-something member of the Mujahed family is terrified out of his mind by the bombing that has struck a nearby hospital. Thanks to his cannabis plant 'Gloria' he eventually passes out stone cold under his bed. As he awakens with 'face and floor tiles sealed together by a membrane of spittle' and checks his emails he finds that he has managed to secure a one-year scholarship to London. As far as Rashid is concerned this opportunity along with the work at The Human Rights Documentation Centre he set up with his best friend Khalil to record the violations happening against Gazans mean one thing and one thing only: a one-way ticket out of Gaza.

Iman, Rashid's twin sister, has just returned from studying in Switzerland. They are obviously a family with better means compared to other Gazans; their father (who now lives in Dubai with his Lebanese girlfriend) used to work for the Palestinian Authority when it was in exile. Already back for a year and teaching at a local school she feels that she is alienated by those who had not left during the occupation. She is desperate to be taken seriously to show how much she wants to help the situation in Gaza. After the night's bombing claims one of her students and his cousin (who she had a crush on) she blindly comes to a decision that could spell a disastrous outcome to everyone.

Sabri is the family's older brother, who has lost his legs, his wife and his child in an attempted assassination. But, in spite of his losses Sabri, the weakest character physically in the novel, is by far the strongest. He seems to rise above his disability (confined to the family's top floor apartment with no lift) and to rise above his daily humiliations (his mother has to change his catheter daily) channeling all his energy to compiling information and documentation and writing a record of the Palestinians' struggle for freedom. Throughout, he holds on to the hope that peace and justice will one day be granted to the Palestinians.

The novel is split into five parts. The first and fifth take place in Gaza, the second and fourth in London and the third in Dubai. We follow Rashid's life in London with Lisa where things don't turn out quite exactly as he had planned. In London, Rashid and Iman come face-to-face with notions of the Palestinians as a 'desolate and abandoned people' (neither of which Rashid feels) and of Israel as 'the most democratic country in the world' (which Lisa utterly refutes). Eventually, Rashid ends up arrested in a case of mistaken identity and ultimately has to leave London to return back to Gaza when his father will not pay for his tuition any longer.

For the brief period that Rashid is there, Iman also joins him after spending a brief and disastrous time with her father in Dubai. In London, she meets Charles whose skin "was foreign and on it his sweat had the smell of wet potato peel." Iman, unlike her brother, does not lose sight of wanting to eventually return to Gaza after her temporary exile. She soon returns in the last part of the book and when Rashid questions her why when she could have stayed longer, she simply answers, "but I don't exist there" as if it were 'incredibly obvious'.

In the novel it seems that everyone is trying to get out of something. The father who has decided that there really is no cause to fight and gets out of it to live a rich man's life in the Gulf. His girlfriend, a Palestinian from the Lebanon camps, trying to put as much distance between herself and the camps as possible. Rashid who just wants out of it: out of Gaza, out of the conflict and out of his Palestinian skin. Iman trying to 'get out' of the feeling of being an outsider in her own country and with her own people, the fighter Ziyyad Ayyoubi trying to get out of his parents' shadow to carve a destiny and legacy of his own. The mother (aka The Sparrow), Abu Omar, Lisa, and many others throughout the novel including carrot boy who is a terrifying personality born of the dire situation in Gaza.

In the final part of the book Rashid has reached the ultimate truth: Gloria is dead, and he is trapped in Gaza. It is in this final utterly sad (at the same time strangely hopeful) part of the book that  Rashid finds his own happiness and comes to terms with his life confident in the realization that he is finally free to choose his own way 'out of it'.

Selma Dabbagh has managed to touch upon a lot of current Arab and Palestinian themes in her novel ingenuously avoiding over-crowding. A feat that is testimony to a very skilled writer indeed. Dabbagh shows supreme confidence in handling her characters and in the weaving of the various elements allowing the story to unfold and ultimately flow beautifully and with ease. This is a sensitive, gripping, compelling, powerful and assured novel. A beautiful story of  love, tragedy and ultimately hope. I smell a sequel!

Email ThisBlogThis!Share to TwitterShare to FacebookShare to Pinterest
Labels: Bookfabulous, Gaza, Israel, Out of It, Palestinian Writing, Selma Dabbagh