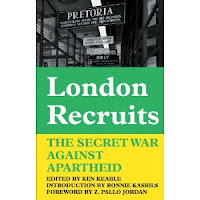 This new book is a collection of important and previously unrecorded accounts of some of London's brave men and women who secretly came together against racial segregation in South Africa. They remember what they did, why they did it and how they feel about it today.

October is officially Black History Month and here is a fact I was not aware of: London played a very big part in anti-apartheid activism in South Africa. How? Well, when in 1964 Nelson Mandela went to prison and other members of the African National Congress (ANC) were either subsequently jailed or killed, the remaining members of the ANC had to go into hiding. It was the bleakest of times for the ANC and it faced its biggest challenge yet: How could its hiding members prove to the people of South Africa that the ANC was still alive and well and that the government had not succeeded in silencing it?

The day was saved thanks to the brains of one man. Enter on to the scene Ronald Kasrils (aka Ronnie) who flew to London and formed along with Yusuf Dadoo, Joe Slovo, and Jack Hodgson, a special committee to develop underground activities in South Africa operating from London. One such activity included recruiting young, white, non-South African students who would pose as tourists in South Africa but would actually smuggle in loads of ANC material right under the South African government's noses. The recruits were mainly from the Young Communist League. Many answered the calling.

These students would enter South Africa posing as couples on honeymoon or just flamboyant young tourists on holiday or even young people looking for a job. It was easy for them to get into the country and the government could not fathom that any white, 'civilized' person could ever be on the ANC's side. The jobs assigned to them included planting 'exploding leaflet buckets' (totally harmless) that would release thousands of leaflets at non-white bus stops or in crowded non-white areas proving to the people and the South African Government that the ANC was still going strong. Thanks to these recruits (unknown to each other), these buckets were released simultaneously in five cities every year between 1967 and 1971.

In addition to these buckets or suitcases, other Young Communist League members were assigned the task of operating cassette recorders attached to amplifiers that would broadcast a recorded message from and songs by the ANC. As soon as the buckets exploded these cassette recorders would be activated. Needless to say, it drove the government mad.

It is no surprise that I learn that not many people know about this. The recruits have all kept their stories secret, even from family and friends up until recently that is. One such recruit, editor Ken Keable, has decided to put pen to paper and record his account of events along with those of others that were involved in similar (yet separate) activities. The book called 'London Recruits: The Secret War Against Apartheid' collects the stories of some of these men and women who not only strongly believed that apartheid was wrong and unjust, but took active steps to do something about it.

According to the latest edition of Greenwich Time, many of these recruits it turns out come from South East London and many will be available to chat to this Saturday October 6,  at Waterstone's in Greenwich city center at 12:30pm. All royalties from this book will go to The Nelson Mandela Children's Fund.

Here is a very interesting clip by Graeme Whyte who has written a chapter in the book, demonstrating how the suitcases were used to smuggle the leaflets into South Africa, (from You Tube).