The Book to Look Forward to in June: 'A Song for Issy Bradley' by Carys Bray 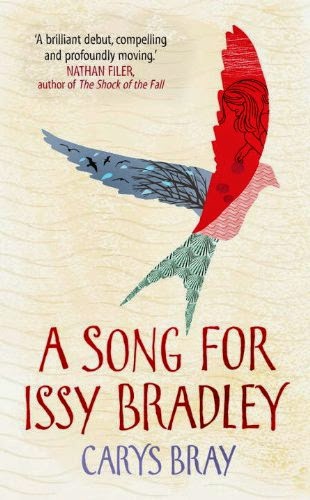 "Ask, and it shall be given you; seek, and ye shall find; knock, and it shall be opened unto you" (Mathew 7:7). But what if the answers are none one seeks to hear or harbinger an existence too unbearable to grasp, answers seeming instead cruel and pointless? Does one break away from one's belief or does it become one's salvation helping one to understand, learn and grow stronger and closer to The One? How much can one person be expected to endure as 'God tests His faithful servants'? What happens when we die? What compels humans to willingly place not only faith, but hope and trust in divine doctrines that seem powerless to stop death and adversity?

These difficult questions are at the core of Carys Bray's debut novel 'A Song for Issy Bradley'. Mormons, Claire and her husband, Bishop Ian Bradley, have lost their five-year-old girl Issy. Suddenly and without any warning, their life is turned upside down and everything they have ever believed in and raised their three remaining children Alma, Zipporah (Zippy), and Jacob to believe is tested and challenged every step of the way as they try to deal with life at this difficult time.

The novel details Mormon life and beliefs through the Bradley's interactions with each other, the members of their faith and 'non-members' in the wider community particularly with regards to Issy's death. Mormons believe that the body is but a vessel that carries the soul inside it and when one dies, the soul leaves this 'shell' and waits for its loved ones in Eternity. As comforting as the idea of reuniting with loved ones may be, how much solace is it to a mother who will never touch or see her child again and to whom Eternity seems like an unbearably long time to wait? or to one brother who wishes he'd told his sister how much he loved her and appreciated her and another who feels they should have grown up and done things together being so close in age; that same brother who is yet too young to understand that the words of God concerning resurrection are not to be taken literally. And how do you comfort a sister who knows she'll one day walk down the aisle but her sibling 'will never be a bridesmaid'?

Issy's father, Bishop Ian Bradley has problems of his own to deal with. A strict and devout Mormon, he is torn between his devotion to his faith and his duty to his parishioners that consumes him leaving not much time for his family and his role as a father who is grieving for the loss of his beautiful baby girl. He is obstinate, unemotional and quite selfish, yet the reader knows he only carries good intentions and his unwavering belief in the righteousness of what he is doing is quite infuriating if not also admirable. And yet when he finally realises that his family is crumbling before his eyes, that is when we see the true nature of the man come to the forefront and whether or not he is the better for it I will leave to the reader's discernment.

The novel also sheds light on certain aspects that concern growing up in a Mormon community. Carys Bray herself was raised by strict Mormon parents and her first-hand experience as such is quite relevant particularly when it comes to describing Zippy's feelings for Adam, a boy in her school that she likes. As a Mormon Zippy is conflicted between giving in to her budding sexuality and the commandment that is the law of chastity which dictates abstinence from sex before marriage. That God expects His followers to keep thoughts clean and be modest in dress, speech, and actions. This not only sets Zippy apart from her counterparts at school obliging her to correct certain misconceptions regarding her faith but it also creates guilt and the need to 'confess' after a brief incident between Adam and herself.

Although the novel in places feels like a 101 class in the Mormon faith, it's saving grace is Bray's beautiful style of writing. She manages to make her characters real, and loveable. Carys Bray tells a stunning heart-warming story about loss that is brave, even funny and so heartbreaking in its sincerity that you'll need to keep that tissue box handy. In short, this is a book about a family, any family, who has to conjecture enough faith to miraculously resurrect itself from the abyss after having lost one of its own.
Posted by Rana Asfour at 03:48

Thank you for a really helpful review. Having already enjoyed Carys Bray's short stories so much, I'm looking forward to reading A Song for Issy Bradley.

Hi Joanna, It really is a lovely book. I hope you enjoy it as much as I did. And thanks for leaving a comment. Have a very lovely day :)