Review: 'The Princess and the Foal' by Stacy Gregg 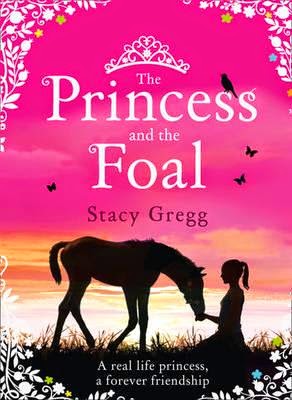 Once upon a time, in the not-so-distant past, there lived a beautiful queen, adored by her King and children and much loved by the people of the land. The King and Queen, famous for their compassion and love for their people, were bound by a deep sense of duty to support the betterment of each and every individual in the land. They would often travel about the Kingdom to wherever they felt their presence most needed earning the altruistic Queen the title of 'Mother of the poor'.

Until sadly, on one ill-fated day, the helicopter transporting the Queen crashes and the Kingdom is plunged into mourning. The King, not only a monarch who has to address his people on the loss of their beloved Queen but as a father he is saddled with the daunting task of informing his two young children, a boy and a girl, that their mother will never return to them again; they will now have to face the ultimate challenge of resuming life without her.

Although the above tale seems as if it were the stuff of fiction, it is a rather brief, but true, account of the life of HRH Queen Alia al-Hussein, the late Queen Consort of Jordan and the third wife to the late King Hussein Bin Talal of Jordan. The children she leaves behind are Prince Ali Bin al-Hussein and Princess Haya Bint al-Hussein, the 'real-life princess' who is the inspiration for Stacy Gregg's children's novel 'The Princess and the Foal'.

The novel highlights a series of events in the life of Princess Haya that occur between the ages of five and twelve. As a young 'titch' she is heartbroken and inconsolable in spite of her father's continuous efforts to help her get over the tragic death of her mother. Adding to her sense of loss is the departure of her old nanny, Grace, who has been replaced by the two-faced governess Frances Ramsmead. With one 'personality' reserved for the King and another for the children and staff, matters don't go smoothly simply because 'Frances is a stupid meany' a young Prince Ali confirms.

Haya's source of solace is her love of horses and it is only at the Royal Stables in Al Hummar that she feels strongest and happiest. Unfortunately, Frances continuously tries to discourage her from being with her beloved animals believing it is the Princess's duty to be a lady, not to associate with the stable staff.

So, when she is entrusted with the care of a young foal on her sixth birthday, who she names 'Bint al Reeh' aka 'Bree', her life takes a different turn and the sadness slowly starts to dissipate. Drawing on the memory of her mother as an athlete, she dreams that she will one day be the first female horse rider to win the King's Cup and make her Father proud. Her dream isn't without obstacles leaving her, in the darkest hour, with a sense that its realisation may be hopeless and unattainable.  Many lessons are learnt along the way.

Stacy Gregg tells a beautiful, refreshing, engaging tale about a princess with a dream. A princess who is not only proud of her ancestry (she wants to be a proper Arabian Princess) but is also endowed with her parents' sense of duty and responsibility. Haya is also a sister and the mischief she gets up to with her brother, Prince Ali, are the best parts of the book and will make you laugh out loud. They are like two peas in a pod and Gregg captures a genuinely affectionate sibling relationship that is heartfelt and heartwarming.

Although the novel draws inspiration from events in the life of Princess Haya of Jordan, mainly the training of her foal for the King's Cup, it is not an exact account of how the training actually took place. It is worth noting that Stacy Gregg's research for the book involved her travelling to Jordan, being granted unprecedented access to the Royal Stables and conducting lengthy interviews with HRH Princess Haya and Her family and friends; this has allowed the imagined and the true to blend harmoniously in the book to create a very believable and enjoyable read.

* HRH is a former Olympic athlete (competed at The Sydney Olympic Games 2000 in Show Jumping) and is currently President of the International Equestrian Federation.

* HRH is the first Jordanian woman to obtain a license to drive heavy trucks in Jordan, which she obtained to drive her horses.

*At age 13, HRH was the first female to represent Jordan internationally in equestrian sport in show jumping. She won an Individual Bronze Medal in the Pan-Arab Equestrian Games in 1992, and is the only female ever to have won a Pan-Arab medal in equestrian sport. Additionally, She was also the first Jordanian athlete to turn professional, signing a commercial contract with the Italian designer Loro Piana in May 2000.

*HRH is married to His Highness Sheikh Mohammed Bin Rashid Al Maktoum, Vice President and Prime Minister of the UAE, Ruler of Dubai. They have one daughter and one son.