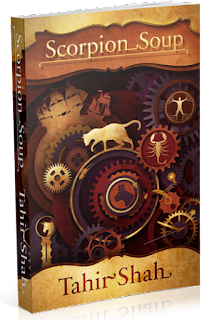 Anyone who grew up in the Middle East in the mid-1980s or spent time there particularly during the month of Ramadan will remember the TV series "Alf Layla Wa Layla - A Thousand and One Nights" starring Egyptian actress Sherihan and directed by Famhy Abdel Hameed. Watched by millions in the Arab World, it owed its main success to the affinity people felt for the tales of Sheherazad and Shehrayar of 'The One Thousand and One Nights'. Not only was the older generation thrilled to have the tales of their childhood played out vividly on their screens but the show also succeeded in sparking an  interest in the younger generation who had assigned these tales to the archives of the past only to find them dusted down and repackaged relevant to their own modern times.

This brings me to storyteller and author Tahir Shah's latest release 'Scorpion Soup'; a work heavily influenced by 'A Thousand and One Nights' as attested by the author in his introduction whereby he writes that this book is 'a small hymn' to the tales that he 'feasted' on since early childhood and have shaped the man he is today. The work is a celebration of stories and storytellers in which ultimately he, Shah himself, emerges supreme.

Shah in 'Scorpion Soup' introduces a network of tales that can only be compared to a set of Russian Dolls, you know the ones where you open up one doll to find another smaller one contained inside it and then that holds a smaller one too and so on until  you get to the last and smallest doll in the set. And that is what Shah does in this book. He starts with one story and then this story is the beginning of another and that contains the beginnings of another all the way until the end when we are back at the first story we started with. All the while commanding the reader's full attention engaging the imagination, entertaining, instructing and questioning. Idle readers beware!

The book begins in the hellish prison of Oran where a once-upon-a-time fisherman is now a shackled worn down slave slowly losing all hope of survival. However, we know he is going to survive because he is going to tell us how a tale recounted in a barely audible whisper by another inmate was key to his salvation. And so the reader's journey with Shah begins. From North Africa to Spain, Ethiopia and Egypt, China, Persia and Iceland. Lands of frogs, lands of cats and others ruled by dogs. We have wizened witches and a jinn in an urn at the bottom of the Red Sea. An old man in a cave and the story of a deity or two.  The reader meets wise men, foolish men, knights, kings, queens, princes and princesses. A box with a rusty nail and a pendant with tears of a unicorn and still more and more and more.

The stories are meant to entertain but Shah has an ulterior motive. He believes that stories are 'part of the default programming of Man' and as such carry an important role in the shaping of minds and souls. His work is not only a nod to a revival of storytelling, he seems to want a complete resurrection and by the looks of it he might just get his wish.

'Scorpion Soup' is currently available as an e-book but hardback copies will be dispatched starting March 2013. The hardback cover is only available to purchase from Taher Shah's personal website. Click HERE to go there.

Outstanding review! Thank you for a well thought out and crafted review that pays due homage to a work of singular importance in our world today.

Yes indeed! This captures both the sense that storytelling is critically essential for all of us and Tahir Shah's work is squarely in that ballpark. Can't wait to read this when it comes out in hard copy.