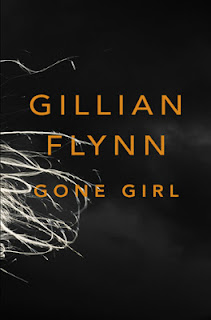 Read this book! Drop whatever it is you are doing and go out and get 'Gone Girl' by Gillian Flynn. If you've already got a reading list for 2013 create space on it for this book. If you have to, bump off one of the books for it (It won't matter which one because I can guarantee you that the one that bites the dust will never measure up to this one). My point: get it on that list.

So why am I so excited about Gillian Flynn's novel? Because it is a story that will genuinely consume you. It traps you like a fly caught in a spider's web, you struggle to leave, to break free and yet the more the struggle the more futile the escape as the author has cast webs such that Spiderman could only dream of. And you will want to leave (somewhere halfway into the book and just before the end of part one to be exact), but you shouldn't and most of you won't be able to and actually I plead with you to hang on, for lurking just there after the page that has part two written on it is a bombshell revelation about to explode; the aftermath of which carries chaos of incredible proportions. And the ending? I dare you to see it coming. I wasn't even close.

This is the story of Amy and Nick who have both lost their jobs in New York and move to Mississippi to Nick's family home. Nick's dad, a proper woman-hater, suffers from Alzheimer's and has been placed in a home ironically run by women who he has to depend on for his daily needs. Nick's mum is suffering from cancer and is the main reason Nick moves back so as to help his sister Go take care of her. Amy is the rich daughter of once-upon-a-time famous authors of the children's book series Amazing Amy. She is beautiful, popular, with the perfect marriage to a husband who adores her. Or so it seems until on the day of her fifth wedding anniversary she suddenly disappears. The police suspect Nick, an accusation he denies. However, Amy's recovered diary tells its own story.

'Gone Girl' is a thriller. A haunting thriller. Not in the sense of ghosts and spirits haunting but as in 'it will haunt you for days and days and days' to come. I personally don't think I'll be forgetting this one any time soon. 'War of the Roses', if you've read it, is a walk in the park compared to Nick and Amy's marriage. This is not only an addictive read but a toxic one. It will test your views on many of today's modern social issues and how we have come to view ourselves and others in this fast paced dominant world of reality television and  the fame that tags along with it. How even our basic everyday reactions to modern day issues are dictated by what movies we see, what books we read and of course the internet. Where everything needs to be as if airbrushed to appear perfect although it is far from that and the extremes one is willing to take to maintain that perfection. And yet despite the knowledge that we've become a society slave to the 'same script syndrome' we still hang on to the  belief that we always know those closest and dearest to us. Or do we?

What are you still doing reading this? Go. Now. Get it!

This was a very suspenseful book with a great plot. The ending was very disappointing, however. It did not match the theme of the book at all and almost felt like you had shifted over into a different book during the last few chapters.