'The Taste of Fear' by Jeremy Bates 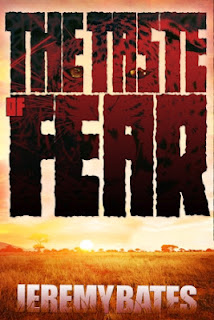 American actress Scarlett Cox and her billionaire husband Salvadore Brazza are abducted when on holiday in Tanzania to try and work out their marriage. The abductors, an Al-Qaeda cell, headed by Algerian-born Jahja al-Ahmad, are on a mission: Bomb the American Embassy in Dar es Salaam in their war against the Western 'infidels', secure hostages and demand the release of a bunch of their guys from American custody within 72 hours.

Jahja's conviction of the righteousness of his brutality is rooted in the fact that he himself suffered irreversible facial deformation when a stray American cruise missile hit his hometown's residential area when on a visit to his parents in Algeria. His father perishes, he is forever deformed and his anger and hate against Americans (all Americans) is now cemented.

Scarlett and her husband are in the wrong place at the wrong time and end up hostages in the calamity that ensues the bomb detonation along with two Embassy women and Australian Thunder who Scarlett has met in Tanzania after she parted ways with her husband after a major fight. Bound and gagged they are thrown in to a van and driven across the border to a safe-house in the Congo where things look bleak and it is obvious that escape is futile.

If that were not enough to deal with, enter two characters: Irish assassin Damien Fitzgerald and Brazza's personal bodyguard, Israeli Danny Zamir. Both ruthless, blood-thirsty killers who will go to any length to get a job done. Damien (aka Redstone) is contracted by Don Xi (an ex-business partner) to kill Brazza. Worried that Brazza might make it out of the hostage situation alive if the abductors were to settle a deal with the negotiators he is adamant Salvadore dies in the African jungle. Having missed an opportunity to kill him once before he wasn't about to let it happen again.

Ruthless bodyguard Danny Zamir an ex-military in the Israeli Defence Forces and the 'Sayeret Matkal', is equally resilient. Having dealt with Don Xi in the only way he sees fit, he is now anxious to get Brazza back home for the opening of his latest hotel chain in Dubai. He too heads to Africa intent on not failing his mission.

'The Taste of Fear' is jam-packed with twists and turns and hardly allows the reader the time to come up for air before being submerged into a new peril. The characters' criminal and intense backgrounds are quite daunting when they are revealed on their own, but it is when Bates allows the characters to share the same space that he manages to create the much anticipated high octane tension that the reader has been waiting for with abated breath. Bates does not disappoint. Sparks fly even among those on the same side.

This is a fast-paced novel with great energy. There is abduction, arson, murder, torture and even lionesses with the author ensuring every chapter packed to the brim with some sort of violence; People dying, body parts flying and lots and lots of blood.

Although the genre may not be one I would normally pick for my reading, I admit that I found it thoroughly enjoyable and a breath of fresh air. So, Shakespeare lovers and searchers of literary fiction, this pick is not for you. If, however, you're after a ridiculously action-packed entertainment-guaranteed thriller, then hang tight, this book is just what you're looking for!

For more on author Jeremy Bates, visit his website HERE