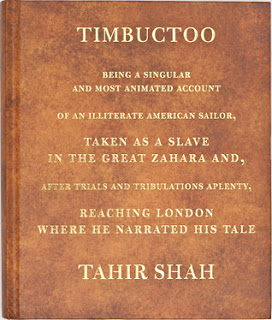 This is a review of Tahir Shah's latest release, 'Timbuctoo' but before I get into it I would like to first tell a story of my own.

In 2007, we bought a house. As anyone who's ever gone through this will tell you, this is one of the most stressful times in one's life. Months of paperwork, seemingly endless days playing a guessing game of will they/won't they, what ifs and what-nots. When you think you can wait no longer, the house keys arrive allowing you to expel that long bottled-up sigh of relief. Unknown to you the worst is yet to come.

We had bought a house but not a new one and so began the journey of refurbishment, of planning permissions, builders, plumbers, electricians and decorators. You name them and we had him/her go through our house. Many tears and cups of tea later and the house was relatively livable and so the family moved in. It was around that time, while on a relaxing trip to the local bookstore that I came across Tahir Shah's 'The Caliph's House'; the true account of the author's move to Casablanca and the relaying of events during the restoration of their property. Problems with our property seemed like a walk in the park compared to what the Shahs had gone through. I was hooked not only by the masterful narration, but also by the gripping tale of the house itself.  They had had to do battle against medieval evil spirits for God's sake and here I was crying over a few rotted bricks and collapsed pipes. I had to remind myself over and over that this was a real story, about a real family, in a real country. It was the humour amid the chaos that won me over and when a year later the sequel 'In Arabian Nights' came out I rushed to read it as well. This book brought to light stories of the Tuareg, the Sufi men and other eccentric stories from the Sahara. It is a book that my father-in-law particularly enjoyed which is saying a lot by a man who has read all there is to read by Tahir Shah's father, Idris Shah.

And so we arrive to 'Timbuctoo' and it seems only right that Tahir Shah should be the one to tell this story. It is a tale about a tale that takes place close to the author's backyard. Tahir Shah's latest release is based on the true account of the illiterate American sailor, Robert Adams, who is shipwrecked along the African coast and taken as a slave in the Great Zahara and then to the city of 'Timbuctoo'; Three years later he is ransomed to the British Consul and makes his way to London where he tells the horrific tale of his enslavement and captivity.

Timbuctoo (also Timbuktu) is a legendary city presumed by Europeans at the time to be made in its entirety of gold and to which expedition after expedition had been sent to retrieve its vast fortune only for the armies to face complete annihilation. When Robert Adams relays his story to The Royal African Committee, his story is not easily believed or received especially that an expedition headed by a Major Peddie has set off for Timbuctoo and large investments are reliant on its success. The narration is marred with suspicion right from the start not only that it is relayed by an American (the British were on the verge of losing the American colony) but also that the accounts relayed by Robert Adams seemed to be contradicting even refuting all that the British knew about Timbuctoo.

The historical bit of the book on which 'Timbuctoo' is based upon is fascinating but what Tahir Shah also sheds light on is the state of the Empire at the time of this narrative. The Regency era extending from 1811 when King George III was deemed unfit to rule and his son The Prince of Wales, ruled by proxy until his father's death in 1820 therefore becoming George IV is a time of excess for the aristocracy and Shah manages to exemplify these excesses in the Prince Regent's eccentric demands and disregard for anyone but himself and his pleasures. He also portrays the vast wealth accumulated by the aristocracy and those in connection with them. Yet, underneath all the glitz and glamour of the society's creme de la creme lies squalor, indecency, immorality and filth. Many times in the book as Robert Adams describes the treacherous conditions and hardships of his captivity, we are reminded that human brutality is never far away from home where the desecration of tombs is taking place, the public exhibition of hangings is a much celebrated event to ogle at and public dissections of dead cadavers hoards in the masses. There is also the injustice of imprisonment in places such as Marshalsea where episodes of squalor, filth and injustice are rampant, where there is little regard to human decency. Time and again Robert Adams is shocked to encounter and to re-live such conditions which he thought he had escaped from when a slave in the Zahara not believing that they could be happening in a civilized white Christian society such as England.

The novel is gripping and packed full with themes of slavery, adventure, conspiracy, murder, and at its heart is not one but two love stories. The first between Robert Adams and his wife Christina and the other between the English Mr. Cavendish and his cousin Beattie. The novel also reads like a who's who of the Regency era with many actual characters making an appearance in Shah's novel: The botanist Sir Joseph Banks, the writer Jane Austen, Lord Byron, and Lady Caroline Lamb to name a few.

This is a fabulous read. Exciting, interesting and fascinating but what makes it that extra bit special is the author's enthusiasm and dedication to the project. This is a novel that inspires hope when it seems that all  hope has dried up and it is a true testament to the resilience of the human spirit even when all the odds are stacked against it and yet it fights and yet it endures. This is one adventure not to be missed.

To hear it from the lion's mouth as some would say, do check out Tahir Shah's YouTube clip. Click HERE!
Posted by Rana Asfour at 14:24