The Smurfs are back this Summer 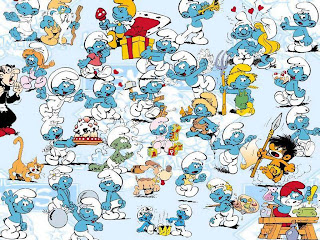 I am so excited that the Smurfs are back on screen this Summer. Cannot wait I tell you. Every evening after school, the Arab country we were in at the time would run episodes of The Smurfs and us children (although by now I was a wee bit older than the rest) would gather round and watch with eager anticipation for the episode to start while reciting the introduction (in Arabic) and thinking that this must be the best show on the planet.
When one of my cousins ridiculed them for being 'tiny' and 'short dwarfs' and what was the fuss all about anyway? it was the first time I heard the saying "precious things come in little packages" for the first time from an adult in the room. So engrossed was I with the show that the identity of the adult never stuck with the saying.
And now they are not only back but Hollywood-big and in 3D. However, this week a book entitled Le Petit Livre Bleu: Analyse critique et politique de la société des Schtroumpfs is causing an uproar from Smurf lovers around the world. It accuses the show of anti-semitism and racism. How bloody awful. Has everything now have to be politicized even children's shows that preach love, caring, looking out for one another and doing good for Good's sake?
Anyway, if you don't know who the Smurfs are here are a few things to get you by: They are all blue (not to be mistaken with Avatar blue), dress in white trousers and white cap and are mainly male except for Smurfette (actually created by the evil wizard Gargamel so she really isn't a Smurf anyway) with her golden locks and sassy white dress. They all have an accessory to identify their personality. My personal favourite is Grouchy Smurf  and Brainy Smurf (something about hormones and books that I must have had since childhood).

In those days our house was surrounded by lush woodland where we would play for hours and hours. As much as it meant to us before the Smurfs as much more magical it became after the episode ended. Our imagination ran rampant searching for the smurfs living under OUR mushroom patch and hoping that we would be the chosen humans who would be led to the village where we would greet everyone and maybe sit down to tea with a bowl of sarsaparilla.
This Summer I can hopefully introduce them to my own child and maybe just maybe we can go out to the woodland and search for them together. Lucky this time around? Who knows?
Posted by Rana Asfour at 12:56

Email ThisBlogThis!Share to TwitterShare to FacebookShare to Pinterest
Labels: Bookfabulous, The Smurfs