My Father's Notebook by Kader Abdolah 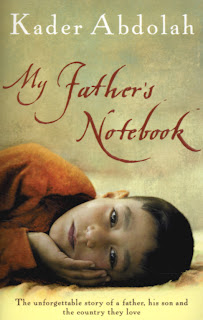 Akbar is taught to write using his own form of cuneiform symbols introduced to him by Kazem Khan who one fine day hands him a pen and a journal, takes him to the holy cave of the village, and explains to him that he must write in cuneiform as they are letters etched into the stone "by a great King". Aga Akbar is hooked and after his death, this journal finds its way to Ishmael who by now lives as a political exile in the Netherlands who decides to translate the journal as a  tribute and final act of love and atonement for his dead father.

The story is told by Ishamel Mahmud Ghaznavi Khorasani who now safely lives at 21 Nieuwgracht not Amsterdam but in the Flevopolder - the reclaimed ground that the Dutch have wrested from the sea. He is battling feelings of loneliness, home-sickness and guilt at having left not only his country but his family behind particularly his father and sister Golden Bell. The revolution that had taken shape in his homeland Iran and in which he played an integral part robbed him of all that he loved and he carries with him a sense of being cheated and unable to make amends with himself for the decisions that he once took.

This is a story of exile, politics and love between family members. It is about the bravery of women and their own battle for recognition in a very harsh environment. It spans different times in Iran's history from the Shahs to Khomeini and the mullahs. It is a great introduction to anyone who does not know much on the subject. Suffism conotations are rampant and the writing is lyrical and poetic.

This is not an autobiography although the writer chooses a protagonist who like him is exiled from his country Iran and lives in Holland. This is may not be a true story in one sense but its interpretation of reality cannot be more real or vivid.

For more on Kader Abdolah, click here.
Posted by Rana Asfour at 17:58

Aga Akbar is real Deaf person not dumb-mute or bastard or what. But He used gesture to communicate with his son, Ishmael. I read that novel a month ago and became a fan of it. =) Hope you can edit that word u made into "Deaf person"...thanks!

Done! Apologies for that and thank you for your comment and for visiting the blog. See you back again soon :)