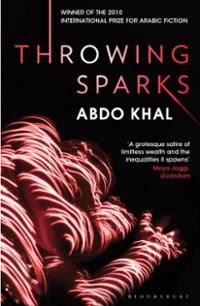 Last week, at the Emirates Airline Festival of Literature, I attended two sessions that featured Abdo Khal: one in which he was part of a panel that hosted IPAF winners, and the other in which he was the main speaker discussing his highly explosive novel 'Throwing Sparks'.

Winner of the IPAF for 2012, 'Throwing Sparks' has been controversial from the word go. Beginning with the choice of title: a partial Qur'anic verse from Surah Al-Mursalat, Aya 32, that describes the fires of Hell as large as castles, and then broaching a tough, eyebrow-raising subject matter: corrupt 'delinquent' characters controlled by a depraved 'Master' of a castle in the Saudi city of Jeddah, Khal ensured that this novel was never going to go unnoticed and it came as no surprise to anyone when it was banned in Saudi Arabia.

I believe that Abdo Khal knew exactly what he was doing when he set about writing his novel and in my opinion, the novel matter is proof that old habits die hard. A former preacher, it could be argued that the castle of Hell that he conjures up in his novel could be an elaborate form of sermon to warn people of the consequences of sin and vice and their detrimental effects on individuals and societies; a Hell on Earth and damnation in the afterlife. And yet, and in spite of all that the reader comes to know, Khal through his character Ibrahim, reminds us that God is ultimately The Gracious and Most Merciful, that forgiveness is truly holy. The perfect ending to a perfect sermon if there ever was one.

The jaw-dropping first paragraph ensnares the reader, and the first few lines are as a noose that wraps itself firmly around the reader's neck tightening and restricting the passageway of air with every turn of the page. I found myself offering very little resistance to the experience, courtesy of human curiosity possibly but most likely because I found the style of writing beautiful, poetic, mesmerising, and gripping (well done translators) albeit claustrophobic at times. I did have to force myself to put the book down, take gulps of air before re-immersing myself in the events of 'Throwing Sparks'. This is a book that is not for the faint-hearted and there are scenes that are revolting to the senses and render the reader livid with indignation and disbelief at the cruelty and the injustice meted out so nonchalantly by the characters. The writer shows no mercy, and only a few pages into the novel, the reader quickly learns to expect none.

The novel follows the story of 51-year-old Tariq who we meet reminiscing about his life and lamenting his 31 years lost in the service of the 'Master'; the cruel, immoral owner of the magnificent castle that sprang up one day on the shores of Jeddah,  changing the lives of the city's dwellers forever. Those on the outside looked to the castle as a 'paradise' that they longed to enter, unknowing that those who had preceded inside long for a chance to escape its walls. Their lives as slaves to the 'Master' is unbearable; They are maimed, scarred, and tainted by the 'Hell' that descended on them from the higher echelons of the palace's dwellers and everyone associated with it.

Tariq's job is an appalling one. He is hand-picked by the 'Master' to serve as a most particular torturer; one to dishonour and humiliate the enemies, and anyone who disobeys the Master, in the vilest, most terrible of ways. In between these 'tasks' he falls in love with the Master's mistress 'Maram', which 'was like touching a live wire... untold misery awaited anyone caught glancing her way when she was in the Master's company or when she stepped out onto the dance floor'. With each new 'task' and every passing year, Tariq grows increasingly richer and more powerful eventually exacting his own vengeance on those he blames for his moral detriment and sullied existence.

This painful, dark satirical novel throws light on the excesses of the rich and wealthy. Their jaded demeanour regarding all worldly pleasures. Tariq labels them as deviants and perverts who are 'basically motivated by boredom: tired of what is socially acceptable, they seek whatever is novel or uncommon to break the monotony of routine pleasures".

Why write the book? it is a question I have asked myself many times and when I posed it to Abdo Khal at the Emirates Airline Festival of Literature in Dubai, he answered that he writes out of love. Love for humanity in all its layers: the good, the bad and the extremely ugly. He believes, as any writer does, that writers are possessed and later become obsessed with the story that takes hold inside of them. He went on to explain that he would stop several times during the writing of 'Throwing Sparks', feeling ill at the words and ideas spewing out onto the page yet helpless and unable to stop them from flowing nonetheless. He was eventually hospitalised and it was the encouragement of his wife who spurred him to complete his work as he'd faltered many a time unable to go on.

And go on he did, presenting a work that although fiction, will strike a chord particularly with readers of this region. The cases in question are sensitive, often volatile issues particularly when it comes to sexuality, morality and honour. In a scene where Tariq approaches his loathsome aunt and wonders if he was there 'to give the lie to all her dire warnings or to confirm them?' one cannot but pause, reflect and wonder whether such a book, with such a dark horrific message, is actually conducive of expelling the myth that already surrounds a country shrouded in gossip and mystique or whether fuel has been added to an already raging fire.