Review: 'Beyond Belief' by Helen Smith 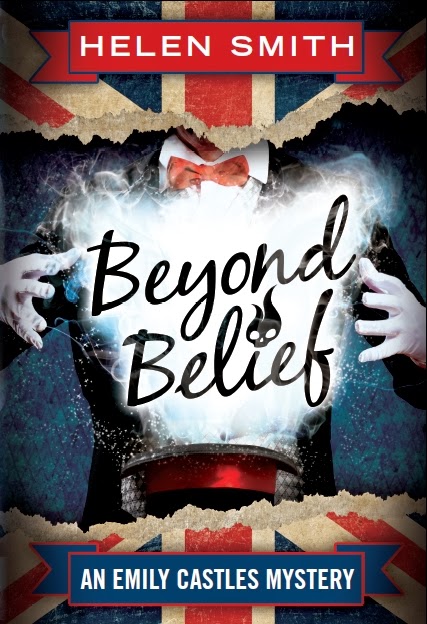 I received a request to read/review 'Beyond Belief' by Helen Smith around Christmas holidays last year. As of January 28th the book has become available in paperback, audio and ebook editions and I am happy to write in that this latest addition to the Emily Castles Mystery series, is just as light-hearted and engaging as ever.

This time, Emily Castles lands a gig with the Royal Society for the Exploration of Science and Culture to attend their annual conference being held in Torquay entitled 'Belief and Beyond'. The society will have for the first time in its history, extended the invitation to mediums, hypnotists and psychics. Emily's mission? Hired by the society's current president Gerald Ayode, she is there to investigate the possible threat to the conference's main attraction and 'super star' Edmund Zenon who is offering a £50,000 reward to anyone who can prove the existence of the paranormal. A well-known rationalist, he is not only a TV celebrity hoping to plug his book at the conference but his tour is aptly entitled 'Don't Believe the Hype'. Quite an inflammatory title at a conference that specialises in nothing but the paranormal.

The setting for the novel is The Seaview Hotel in Torquay aptly named for its location. It is in the waters of Torquay that Zenon has promised his audience, who are gathering in this seaside village from near and far, the most amazing gig on Earth: he will walk on water. And so enter a wide range of amusing (the colonel) and the not so amusing (Madame Nova) and even sinister characters who are all hoping to witness the moment Zenon delivers on his promise.

By now readers of Helen Smith will be expecting a diverse list of eccentric characters and she does not fail to deliver. There is never a dull moment as the characters battle each other for attention. There is murder, fortune-telling, a prophecy, and a very memorable baptism scene. And, of course, there is philosophy professor, Dr. Muriel Crowther, who is like the 'Watson' to our female 'Sherlock'.

Helen Smith's 'Beyond Belief', a whodunnit in all sense of the word, touches upon sensitive, humane issues such as ordinary people's need for the paranormal and the reason people feed into the hype of fortune tellers, psychics, and mediums. It also highlights how wrong it could all go and how easily some take advantage to prey and exploit people's vulnerabilities at a time of loss, bereavement and loneliness. It highlights how people's fears, anxieties, hopes and dreams are feeding an industry, whether authentic in its claims or not, that is constantly expanding and that is proving hard to ignore.

Finally, let me tell you why I like Helen Smith and why you should read her books. It's simple: Helen Smith is an author who listens to her readers. When those readers loved Emily Castles from the word go and asked to know more about her, Helen Smith was listening. In 'Beyond Belief' she creates settings that allow her main character the opportunity to connect with the reader. We glimpse a more intimate, possibly romantic side to Emily that was lacking in the previous book. I do believe she has a lot of growing up to do as a character and I do think there is more to her than the author is letting on. And best of all? Emily's a South London girl. Enough said!

Other books written by Helen Smith & reviewed by BOOKFABULOUS:
An Invitation to Die
The Miracle Inspector

To know more about Helen Smith, click HERE.
Posted by Rana Asfour at 05:11