'The Long Weekend' by Savita Kalhan 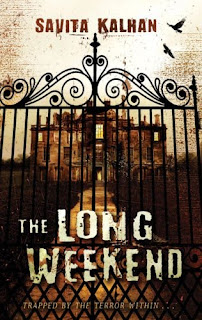 'The Long Weekend' opens with seventh grader Sam who has 'moved schools four times and moved countries three times - and he was only eleven' but is quite happy to have made friends with Lloyd, the coolest kid in the class. According to Sam, his new friend Lloyd was the luckiest kid ever. Born to rich parents he seemed to own all the latest gadgets (Sam's parents had made it clear that he would never get an Xbox or PlayStation ever) yet Lloyd's parents had promised him what seems like an iphone for his next birthday (Sam was still working on his mum to buy him one). Understandably, Sam could barely contain his excitement till the end of school that day as the plan was for the two boys to hang out together at Lloyd's house. Following a slight confusion on whose house they're supposed to be going to, Lloyd announces that they will find out 'when one or both sets of parents pick them up". Problem solved.

The parents are late to arrive and the boys get caught in a very heavy downpour but all is well when finally 'one of those big flash Mercs you see ferrying celebrities and rock stars around' arrives. Gleaming white, it seemed to Sam like a beacon calling 'come inside where it's warm and dry'. Very impressed by it all (he knew Lloyd's dad was rich but hadn't imagined how rich but again he does admit to himself that there isn't much he does know about Lloyd yet) Sam follows Lloyd who has already jumped into the car. This is the first disquieting moment of many more to come that you the reader find yourself continuously shouting NO! at the unresponsive pages particularly at the point when the boys are abducted later in the story.

Once the boys reach their destination, a grand mansion in the countryside, they are allowed to play in a room that is 'every kid's dream', fed and then sent off to bed each to his room. To avoid revealing too much it is suffice to say that bad things happen that night. An abductor is revealed showing his true colours and from that point forward the novel seems to take on a life of is own as the quick paced rhythm leaves the reader breathless and unable to put the book down not knowing whether those two boys are going to live to tell their tale.

This is a brutal but not gruesome book in the sense that it is not graphic in its brutality but do not be deceived: 'The Long Weekend' is a terrifying horrific read nonetheless. You are constantly worried about the boys, praying for them to make it knowing full well that they are in the hands of a sadistic capable killer. This is a concise well put together novel with the author weaving a very chilling, highly believable plot. But this is also a book about loyalty, bravery, lessons learnt the hard way and new beginnings. A very gripping read that would do well for every eleven year-old to read!

Seems to be a very gripping novel. I am going to suggest it to my daughter. Hope it does not scare her!!

Hi Monika. Yes, it really is a gripping novel and suitable for any age above 10 years. I hope your daughter enjoys it and I would love to know how she gets on with it :)