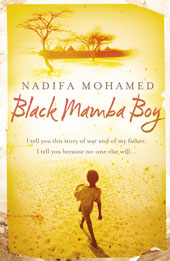 Black Mamba Boy is the compelling and stunning fictionalised account of author Nadifa Mohamed's father, Jama; a Somali born to a superstitious, resilient and loving mother, Ambaro and hardened dreamer father, Guure. The book starts in Aden, where Jama and his mother live a dismal life on the roof of some relatives' home who have agreed to take them in when Ambaro had moved to the city (from Somalia) to make a better life for herself and her son. With his father gone to find work in Sudan, Jama's constant yearning is to be re-united with him once more.

When Jama's mother dies he embarks on what can only be described as an epic journey searching for a father whose face he doesn't even know. The time is the 1930's and the setting is Africa where this illiterate, uneducated ten-year-old boy, barefoot most of the time, has to travel by train, lorry, camel and bus, on his own across lands that are barren blistering desert where the beginnings of a mass famine are taking root.

But Jama is one lucky boy, his luck in stark contrast to those around him. He survives captivity on an Italian compound held in a chicken pen like an animal only for his friend Shidane to die the most gruesome of deaths. He survives malaria when others perish and emerges dusty, disoriented and yet scratch-free when a bomb detonates at one of the Italian guard posts, with him the only survivor. In one instant Jama is land owner and rich and yet suddenly he is a sailor aboard the ill-fated 1947 Exodus ship mingling with Holocaust survivors. At one point imprisoned by the Egyptians, he even manages to save the life of a Lebanese driver. But for all Jama's luck it is on the night he is finally to be re-united with his father, the man of his dreams, that his luck faces its biggest challenge.

Black Mamba Boy is a beautifully written book full to the brim with mysticism interlaced with brutal reality. The book definitely depicts the harsh political, economic and social hardships East Africa's people and those of the neighbouring countries in the region were having to face at the time Jama went in search of his father. But Nadifa Mohamed's main interest lies not in dissecting these circumstances or laying blame, in fact the harshness of the book is in its reality and unapologising attitude. The message is clear: this is what Jama had to deal with and this is what he had to do to survive. My tip would be to read a little about the history of Somalia and Eritrea particularly to get a better grasp of the effects of British and Italian presence in the region and how it translated in the daily life of the people in East Africa.

There are many stations that exude beauty, lyricism and astounding writing from the author and I found the first pages of the book to be the most magical and powerful. Throughout the book themes of exodus and a search of a promised land are very dominant and particularly evident in the manner that Mohamed chooses to end her book. The ending did seem a bit rushed and I am quite mildly surprised that since its publication in 2009 there hasn't been a sequel. But who knows?

In the end, this may be a story about a boy in search of his father but it is most certainly to do with a girl who believes her father is "the real hero, not the fighting or romantic kind but the real deal, the starved child that survives every sling and arrow that shameless fortune throws at them, and who can sit back and tell the stories of all the ones that didn't make it." This girl promised to be her father's griot and has well and truly succeeded!