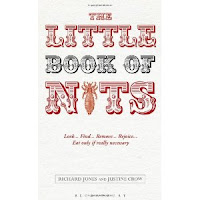 Saying that BOOKFABULOUS! fell in love with Justine Crow is the understatement of the year. She is fun, bubbly, and very very passionate about everything she does. And boy does she do a lot; She is co-owner of the quaintest bookshop 'The Bookseller Crow' with her husband Jonathan. She is a restaurant reviewer, swimming instructor and mother of three. If that were not enough for any one person, she has just added author to her list of achievements by publishing a divine guidebook called 'The Little Book of Nits' with Richard Jones. She kindly took the time from her busy schedule to chat to BOOKFABULOUS!

Q: Justine, you're not a scientist or an entomologist, so what made you decide to write this book about nits? Is there a certain message you want your readers to grasp?
A: Today in my bookshop a rather awkward customer asked just that question - she picked the book off the counter, screwed up her nose and said: "Who on earth would want to write a book about nits?" with an expression that implied she thought the whole concept was perfectly ghastly. Initially, the idea from all the stories my fellow parents blurted once the secret was out that their kids had head lice because I found it extraordinary that something so ordinary was so funny and interesting. My middle daughter was friends with Richard's [her co-author] daughter; he is known as the Bugman. We chatted and as an entomologist, he was instantly enthusiastic. He also understood the 'Little book of ...' bit. Though secretly he'd prefer to have written the Complete Nit! If there's a message it is that by addressing the scourge of head lice as a social and cultural phenomenon, we apply some common sense. If we stop desiring and instant solution to an age-old problem, we will be better equipped to control infestation.

Q: What kind of research did you do for this book?
A: The Bugman had tons of brilliant books containing exquisite Victorian plates of lice and he really enjoyed getting down to the er, nitty gritty of scientific research. No kidding, he could write volumes on lice alone. Meanwhile, I was working in schools so it was easy to collect people's experiences. And I was astonished by the misinformation out there, often peddled by those in authority through ignorance. Why on earth would a nursery nurse actually prefer to believe that blondes don't get nits? Ah, that's be because she was in denial. Then between us we added louse related ephemera such as the Russian anti-lice poster, the recipes and remedies, the stuff about lice in literature and art.

Q: What were the challenges you faced bringing this book to life? And what have you learnt in the process?
A: we were very lucky when we finally go Bloomsbury on board as they totally 'got' what we were trying to do. Before they made contact, despite Richard's breadth of knowledge and publishing and broadcast experience - as well as writing insect-based reference works for other publishers (he contributes to the BBC World Wildlife and was a regular on R4's Home Planet) we couldn't drum up any interest. We had almost given up when Bloomsbury called. And they have been excellent. They applied our ideas, worked fast and produced a very attractive book. They should be proud. If we learned anything it was that a good idea doesn't go away but being a bookseller meant that my expectations were different to those of most other first time authors out there.

Q: How would you rate the experience of writing and do you see it as a career now? Do you have any advice for other writers?
A: Writing the book was fun but on occasions, mind numbing. I already write, short, fast reviews for children's books and restaurants but what I love doing most of all is telling stories, fictionalized or anecdotal non-fiction type things. Creating what is essentially a reference manual with jokes was - how can I put this? - a test of my intellectual stamina. The Bugman thrived on it however! As for other people who want to get published I would advise patience and a general lowering of expectations. That is me wearing my bookseller's hat. There are just soooo many books out there that even if you get a deal, you cannot guarantee sales success. Either find a niche and pursue it with web presence or write because you love it and need to and any sign of a reward for what you do, recognition or cash, is a bonus. I certainly don't see writing as a 'career' but I do see it as something integral to my character.

Q: Who designed the cover?
A: I designed the cover! As I said, Bloomsbury was just fantastic at interpreting our ideas. I pictured a kind of vaudevillian, medicine show, snake oil sort of feel. And of course,head lice are so pretty.

Q:You co-own a bookshop 'The Bookseller Crow', in your experience how has the book industry been affected by the emergence of e-books on the scene? Is there a real threat to bookshops?
A: Our shop has had much to cope with over the years and it is a wonder we are still standing. First the net book agreement was trashed, thereby removing the the 'level playing field' and allowing supermarkets and big chains to flog books off more cheaply than we could afford to buy them from the publishers (there are many other countries with thriving book industries who refused to allow this to happen). Then, the rise of the internet retailer meant that any residual business was mopped up. Of course we use the web ourselves - our website gets many hits and Jon's daily blog is very popular, plus he is an utter Twitter fiend. Now e-books have muscled in. We are not so naive - we have an e-reader at home. It is perfect for downloading the manuscripts my partner reads for publishers. In all honesty, we have noticed a drop in holiday reading sales but often those books are airport reads and frankly, we lost the best of that business to the supermarkets long ago. Some things suit the hardware like text books but we never made money from academic stuff anyway as the margins are so tight. Children's books look awful on a Kindle. Where's the fun if you are three years old and can't turn a page yourself? I think it is human nature to want to reflect ourselves through fashion and lifestyle. At the moment, some like to be 'seen' holding an e-reader but if your fellow commuters can't get the statement message about the novel actually being read on the screen and can't even guess at what kind of person is behind the gadget, I can't see it remaining a fashion accessory for ever. Though apparently the rise in soft porn fiction is related to the fact that nobody knows you are reading it... it's like having a copy of the Beano to hide the smut under! Ultimately though, we are disadvantaged once again because we aren't allowed to sell e-books. Big business has kept that innovation to themselves and the independent trader doesn't get a look in. Even the noble independent bookseller James Daunt went in with Amazon once he was given the reins at Waterstones. There is a threat to bookshops but it is a combination of factors that has engineered their disappearance from the high street. Even big chains like Borders and Ottakers have gone. The public gets what it asks for...

Q: What's your next project?
A: Our next 'Little Book of ...' is going to be about all things that bite and sting. We are definitely drawn to things that many consider unpleasant but that are in fact easily avoided and dealt with. I have lots of other ideas for books and in a virtual world, I could fill many gaps on our shop shelves with titles that nobody has published yet. The hard bit is getting the blimmin' publishers to do their bit.

Q: What are you reading now?
A: I have just finished reading 'Irma Voth' by Miriam Toewes. A superbly bonkers novel set in New Mexico amidst a Mennonite community. It was quite simply the most uplifting celebration of art on the printed page I have come across for donkeys. It is at last, a story that isn't miserable, even though it contains misery. Next up, Philip Hensher's 'King of the Badgers' for our shop reading group.
Posted by Rana Asfour at 13:51