The Night of the Mi'raj by Zoe Ferraris 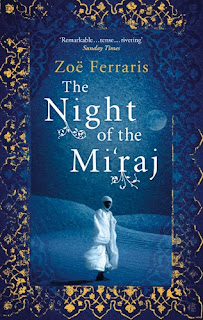 I have had this book on my wish list for nearly a year now and then voila I was given it as a Christmas present. Excitedly, I managed to read it in one sitting especially that I had just finished reading another book about Saudi Arabia called The Consequences of Love by Sulaiman Addonia.
The story is about a sixteen-year-old girl, Nouf ash-Shrawi, who is found dead in the desert of Saudi Arabia. The daughter of a wealthy Jeddah family, there are questions whether she ran away or was abducted and left to die in the desert. To answer these questions, Othman, the eldest son of the ash-Shrawi family enlists the help of his life-long friend and desert guide, Nayir.
A devout and strict Muslim, we find that Nayir struggles with issues of his own. Being a strictly religious man he is faced with qualms upon having to work closely with Othman's fiancee, the lab technician Katya Hijazi. A big problem for him as he has never even had a chance to talk to a woman. Also, he had known Nouf when she was an innocent child taking her on excursions in the desert but is now faced to consider her initially as victim and then later as a woman pregnant out of wedlock planning to take her fate into her own hands.
This is an attempt at a crime novel although the plot is not so intricate and you will guess a lot of where it is going way before the end although I must admit that I did not see the ending coming and it took me totally by surprise. And I think that is why I liked the book. A gripping novel and although at times slow paced but the descriptions of the desert and the use of the Koranic verses are a window into an exotic culture that is fascinating if not terrifying and claustrophobic.
This is not a novel about Saudi Arabia. Little is learned about the country itself and a lot of the stereotypes that have become associated with the country are all there; what was fascinating though that both The Consequences of Love and The Night of the Mi'raj had pink shoes in them. The two events are unrelated but connected to a total stereotyping pertaining to the attitude of men in Saudi assuming that all women must like pink.
This is an enjoyable and gripping read and the fact that the author herself lived in a strict Saudi community for a while gives it a degree of authenticity if not sadly complete accuracy at times which leaves one with a sense that there is little that is revealed of a country veiled in complexity.

Note: The follow-up book is called City of Veils was published this year and I will be reviewing that soon.
Posted by Rana Asfour at 20:58

Email ThisBlogThis!Share to TwitterShare to FacebookShare to Pinterest
Labels: Bookfabulous, The consequences of love, The Night of the Mi'raj, Zoe Ferraris